The Contax 139 is an electronically controlled mechanical camera. 'Mechanical' in that all the physical operations are driven directly by operating the film advance lever or by springs that are tensioned by the same action. Those springs subsequently drive the mirror up, rotate the shutter main shaft, drive the shutter curtains and return the mirror back to its normal position - in that order. Without any electronic control, all the steps in the sequence will still happen if manually triggered. The electronics just introduce a delay between the release of the first and second curtains by blocking the release of the second curtain with an electro-magnet and so controlling the period the shutter is open for.

Sometimes the sequence might not complete, or maybe fails to start, leaving the camera in a blocked condition where it's not possible to operate the film advance lever and the shutter release does nothing. Here's some tips on identifying where the problem could be and what might be done about it.

The first step is to identify if the sequence has started and, if so, at what point it has stalled. This is done by inspecting the position of the mirror and the shutter curtains. Check if the mirror is up or down. Also check if the shutter is open or closed and, if closed, whether it is still cocked or not. The following two pictures show the shutter in both cocked and released condition looking at the back of the shutter.

1. Mirror is down and shutter is still cocked.
The sequence hasn't started. Watch the data back LED located at the bottom left of the shutter (visible in above pictures) and press the shutter release. If the LED flashes, the most likely fault is the release magnet is stuck. The release magnet is a permanent magnet which holds the mirror mechanism in its cocked condition. To release the mirror, an electro-magnet, wound around the permanent magnet and in opposition to it, is energised so cancelling the permanent magnet field and releasing the mechanism. The face of the magnet can become contaminated causing the release lever to stick to it even when the magnetic field is cancelled. The solution is to clean the magnet and release lever faces. There is more information on this on my DIY page. If the data back LED doesn't flash, the release signal is not getting through to the magnet driver circuit. Most likely cause is the transfer switch but there could be other reasons. More investigation is required.

If the shutter doesn't release even when manually moving the release lever, there is a fault with the shutter. It's possible something is blocking the shutter, such as a piece of broken film, so it's worth trying to blow any debris out of the shutter with a can of compressed air. Other than that, the shutter needs removing for investigation.

4. Mirror is up and shutter is closed but not cocked.
In this instance, the first thing to check is if the shutter has fully closed. Compare the shutter with the 'Shutter released' picture above. There may only be a millimetre of difference in the position of the shutter blades but that is enough to cause a problem. If the curtain isn't fully closed, it may be pushed upwards by pushing against one of the rivets. This may close the curtain and release the mirror. If this happens, the problem is likely to be the second curtain brake which can become seized, or very tight, and prevent the curtain from fully closing. There is information on my DIY page about this issue. If the shutter is fully closed but the mirror hasn't returned then the problem is likely to be with the mirror mechanism again as in 2 above.

5. Mirror is down and shutter is not cocked.
The sequence has completed normally. 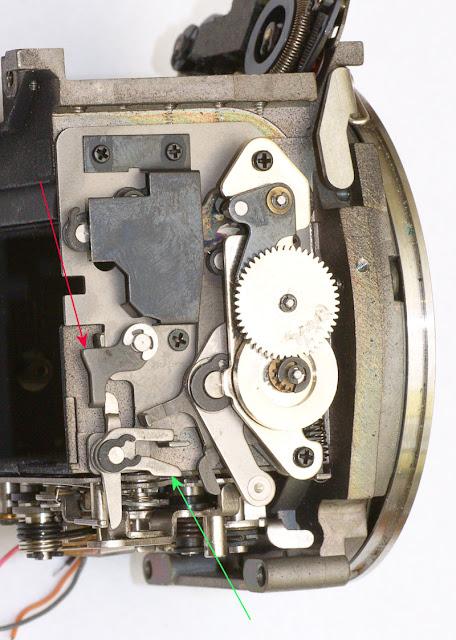 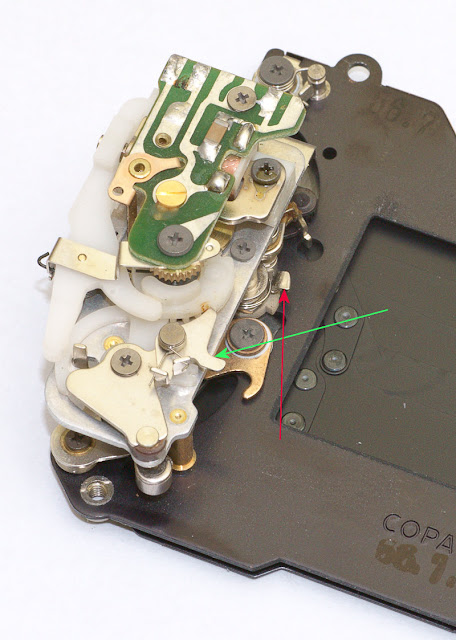