I bought an S2 a few weeks ago from a dealer in Japan who described it as good condition but with a faulty meter. The fault meant it was a fair, though not necessarily cheap, price. I bought it with the view of fixing it and keeping it. On receipt, though, it was obvious there were several other problems with it. A few emails back and forth and the seller agreed my, much reduced, valuation of the camera and gave me a partial refund.

One of the problems was massively slow top shutter speeds. To do anything with the shutter usually means removing it and that means an almost total dismantle of the camera. Here's the camera now. 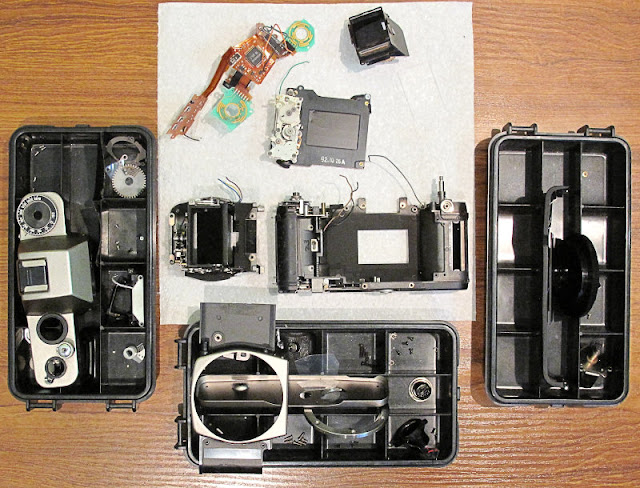 The shutter (top middle) is not intended to be repaired or adjusted. The manual says shutters come pre-adjusted and gives no information on how to adjust them. I've worked on these shutters before and have discovered the general principles of how to adjust them but the process is more art than science and this one is not cooperating. I might have to find a replacement.

Here's the shutter back in the camera for testing after one of my many attempts to get all the speeds to within specification.

I'll post further news of this adventure in camera repair as it happens.
No comments:

The site is pretty much back to what it was before its 'accidental' deletion from Tumblr. I couldn't face recreating it on Tumblr again as there was a lot of hacking involved to get what is essentially a blogging platform to look like a normal website. So I'm trying out Google Sites. Seems to work OK but I've already hit a few limitaions. But it does most of what I want - and it's free...

I'm planning on using this 'blog' space for any site updates and also any other information that doesn't really fit elsewhere.
No comments: