NOTE: Since writing this I have completely changed my view on who made these FX-3 variants. They were, I'm now sure, made by Phenix in China and not Cosina. In fact, there is no evidence, that I've ever seen, to support the theory that Cosina made FX-3 cameras at any time. There is plenty of evidence that Phenix did though.

I've been doing a bit of research into what other cameras, made by Cosina Phenix, were based on the same chassis as the FX-3 and, therefore, may share other parts and be useful as donors. Or perhaps may be alternatives to buy and use. What I have found is there were a number of similar cameras and quite a few were made with the Pentax K mount - the previously mentioned Centon K100 being one and others sold under the brands of Vivitar, Braun, Hikari, Promaster, Kenko, Phenix and probably a few more. (Note: not all cameras sold under these brand names were based on the same chassis). Some of these were also available with Nikon or Minolta MD lens mounts. Most are mechanical cameras using the same Copal shutter as the Yashica FX-3 or FX-3 Super 2000 though a few, including the Centon K100, seem to use an electronic Seiko shutter.

I recently acquired a Vivitar V3000 and a V3800N which are all but identical to a Yashica Super 2000 except they have a PK mount. The V3800N was given a face lift and uses a rear door straight off the Centon K100 complete with the rubber covers.

So there are many models that came from Cosina Phenix that share parts and features. All are quite basic and mostly very usable. With a choice of lens mounts available these are cheap ways of maybe trying out a lens without committing to a full system.

As a, sort of, proof of the compatibility of these cameras, I took three cameras I had, all of which had issues and none of which were really worth repairing in their own right, and built one camera from the three. Most of the operational parts (shutter, metering system and viewfinder) came from a Yashica FX-3 Super 2000 but the chassis of the camera was in poor condition with a lot of paint loss so I used a chassis from an original FX-3 and transferred the parts to that. I kept the original FX-3 film advance mechanism in the chassis. I then fitted top and bottom plates, rear door and rubber covers from a Centon K100. Here's the result fitted with a Contax 45mm f/2.8 pancake lens and custom made hood. 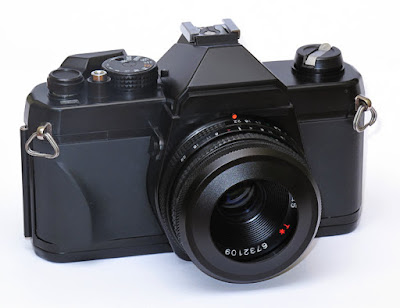 I removed the Centon name and model from the top plate as that's not what the camera is.