Not really applicable to the 139 but from the 159 onwards rubber covers were used on all the Contax SLRs. These often look past their best and, unlike the leatherette covers on earlier models, can't be easily replaced. I've experimented with methods of cleaning them and think I finally have a reasonable solution.

If the rubber is just showing signs of turning light grey or white from age, cleaning with a cloth and some isopropyl alcohol (IPA) will normally bring back the original colour. A toothbrush is useful to get into corners.

If cleaning with IPA doesn't work, or if the surface has become shiny from handling, then I've found scraping the surface is the answer. I use the back edge of a knife - the sort where you break off the blade as it becomes used. While scraping, the surface will become even more white, or maybe brown if there's a lot of dirt as well. This is then cleaned off with IPA. It might need scraping more than once to get the cover completely clean. I've found it's usually easier to remove the cover from the camera first. This allows the edges to be done without risk of scratching the camera. 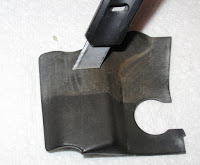 Here's the front rubber from a 159 being done. I've done half of it to show the effect of scraping.

Below is the rear of the same camera after being fully cleaned. The back previously had a lot of shiny areas from handling. 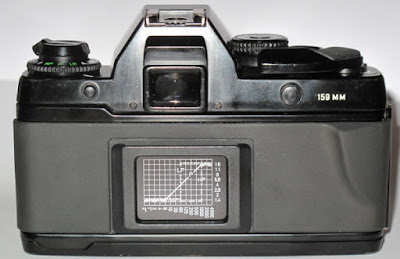 A caution: Some models had a different type of rubber covering. The only one I'm sure about is the rear door of the Aria. It has a very thin layer of rubber that is not removable and is often worn through so shiny areas are actually the plastic underneath. Don't try this technique on such covers.
No comments:

I've always known not all Contax flashes work on all Contax bodies but I've never been sure which combinations work and which don't. I decided to do a little research and some tests. Here's the results.

I think the best way to understand the combinations is to split the various cameras and flashes into three groups thus:

Group 1 used two additional contacts on the hot shoe. One was for the flash to indicate to the camera it was ready (Ready signal) and the other was for the camera to stop the flash when sufficient exposure had been given (TTL Control signal).

So to summarise: Groups 2 and 3 cameras are compatible with all TLA flashes (see note 5). Group 1 cameras are only compatible with Group 1 flashes. In theory, Group 1 cameras can use Groups 2 and 3 flashes but only in manual mode, however, when trying it myself, the flash made a rather disconcerting noise after each flash suggesting some connection between the additional contacts was not ideal. I wouldn't recommend this.

Notes:
1. The original RTS had no built-in flash control so is not included.

2. There was an earlier version of the RTF540 which did not have TLA capability.

3. I found the TLA280 would not physically fit onto a 139 body due to the additional contacts catching the edge of the hot shoe. If the contacts were manually depressed, it could be made to fit. Maybe this was a deliberate design choice to stop them being used together.

4. The Aria, RX, RX2 and AX bodies have 2 more additional contacts, so 5 contacts in total. The 2 extra contacts are clock and data signals to pass extra information to the flash. As far as I know, only the TLA360 has this capability.

5. I don't have examples of every camera and flash so this is based on a combination of information I've read such as camera operator manuals, tests on the combination of bodies and flashes I do have and some assumptions.
3 comments: