Bitser (Bitzer): "A thing that is made from parts that originally did not belong together."

I acquired another 139 parts camera recently. These are cameras that have too many problems to make it economical to repair. They end up in my 'parts camera' drawer and get regularly picked over when I'm in need of a part to repair another camera. I have nine or ten I guess, some of which are little more than a chassis with a few parts left attached. As I was adding the most recent one to my collection, I thought about the possibility of making a complete, working, camera out of the various bits and pieces.

Always up for a challenge, I picked out the best chassis I could find as a starting point. The chassis had a shutter, which tested as OK, along with the film advance mechanism, which had a problem, and the electronic PCB. A mirror box with a clean viewfinder came from another camera. The top plate and all the other parts came from several other donors.

With the film advance issue resolved, I assembled all the parts onto the chassis, cleaning and lubricating etc. along the way. I wanted to fit a base plate with a serial number that was of the correct period for the modification level of the camera. The chassis I used had the last version of the transfer switch and the mirror box had the later version of the release magnet and associated mechanism, so I needed a base plate with a high(ish) serial number. I found just one that fitted the bill. It was a bit bent and dented but a couple of blocks of wood and a hammer got it into shape and soon fitted.

The final thing, after a full function and film test, was to add some covers. I had some freebies supplied by Aki-Asahi and, in the spirit of using up what I had, I fitted those. I actually think they are OK though not a colour I would normally use. I also had some matching winder covers and so a winder I acquired with a camera recently got a quick overhaul and new covers fitted to complete the look.

I'm not sure I'm going to give it much use but I like how it looks and find it satisfying to have built a complete camera from spare parts. It will sit on the shelf for a while until I decide what to do with it. 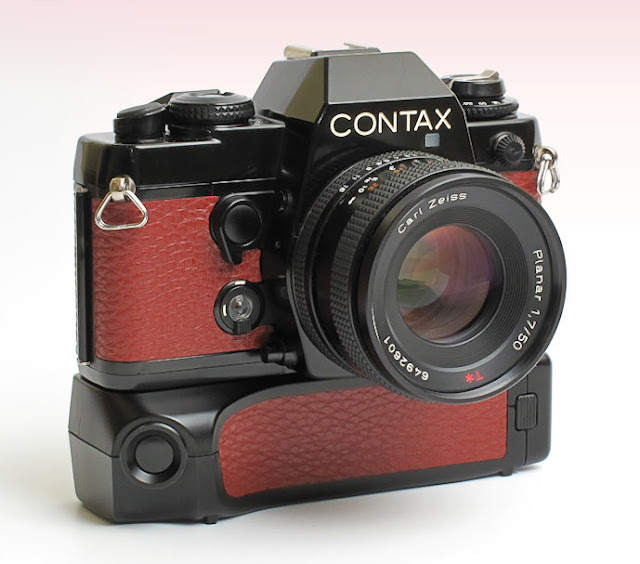