This might seem a particularly boring subject to write a blog post about but it's intended to be the first of a few posts regarding the information that get's passed to the camera body from the lens. This has been prompted by some questions I had and which I'm in the process of doing some investigation of. Also, the suspected incompatibility between some lenses and camera bodies suggested by some forum posts but yet to be confirmed.

Rather than try and cover everything in one long post I thought I would split it up and start here with a general explanation of the linkage between lens and camera.

Besides the bayonet itself, there are, up to, four points where the lens and body couple together. Earlier AE lenses had three then a fourth was added to MM lenses to tell the camera a MM lens is attached. The diagrams show the points of contact on the body and the lens with a description of each below. 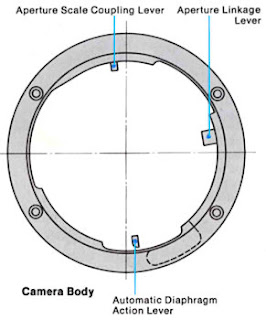 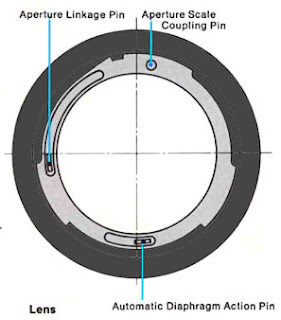 Aperture Linkage Pin/Lever (Aperture stop down lever). The pin on the lens rotates as the lens aperture is changed and couples to a lug (described as a lever in the diagram) on a ring that rotates around the camera lens mount and which, in turn, couples to a device that converts the position of the ring into an electrical signal. On earlier cameras this was done using a potentiometer (variable resistor) which was part of the metering circuit. On later cameras, the potentiometer was replaced by an encoder that outputs a digital code.

The value passed to the camera represents the number of stops that the lens has been stopped down from maximum. It doesn't represent an actual aperture value.

Aperture Scale Coupling Pin/Lever (Maximum aperture lever). The 'pin' on the lens may actually be a lever or a shaped lug depending on the lens. It is in a fixed position that represents the maximum aperture of the lens. It couples with a lever on the body to transfer this information to the camera so that it can display the actual aperture in use. On earlier cameras a mechanical system, that linked the maximum aperture information and the number of stops the lens has been stopped down, was used to display the aperture in use. On later cameras with electronic displays it is done electronically.

The Contax S2/S2b and some Yashica cameras that don't have an aperture display in the viewfinder, don't use this feature.

Automatic Diaphragm Action Pin/Lever. This lever is driven from the camera and causes the lens to stop down to the selected aperture. On later MM cameras when used in shutter priority or program modes, this lever will move just the correct amount to stop the lens down to the required aperture.

AE/MM switch (not shown on diagram). On MM lenses, an extra lug was added which extends just beyond the bayonet mount and engages with the switch on the camera. The switch is a three position switch. The first, default, position is for AE lenses (AE lenses don't have the extra lug so the switch doesn't move). The third position is for MM lenses but there is also a mid position which I intend to be the subject of one of my following posts.